Since 2009, The Federation’s Youth Education Bursary has been supporting young people who want to pursue a career in the human social services.

Over that time, more than 120 recipients have received over $140,000 dollars to help them access post-secondary studies.

Applications for the 2017 bursary are now open. I encourage you all to share information about the bursary with young people and your colleagues that work with young people. Print them off an application, help them fill out, or offer to be one of their references.

Do what you can to help eligible young people access these funds.

Things like tuition waivers are becoming more accessible but many young people that are or have been in care still face barriers to post-secondary education. This bursary can help.

But more than just money in their hands, the Youth Education Bursary is about supporting youth in care throughout their young lives.

It’s about offering them a pathway to a career in our sector. It’s about welcoming young people into this field of work with open arms and a helping hand.

You can learn more about the Youth Education Bursary and download application forms here.

If you have any questions about the bursary or how to help a youth complete their application, please contact The Federation office.

Altogether Better means welcoming young people into our circle and supporting those who would follow in our footsteps:

“There was a point in life where I thought I could never succeed or amount to anything. Receiving this award really gives me a sense of purpose in my career and in life. It gives me confidence going forward in my post-secondary education and provides me with hope. Thank you so much for all you have done for me, and other people like me that want to make a change.” – 2015 Bursary Recipient

Only a small number of people across BC would agree that they are much better off than they were five or ten years ago. Research, statistics, and anecdotal evidence reiterate the fact that things have not significantly improved since the last election.

As such, The Federation identified two key goals for the 2017 provincial election cycle:

Social services are an election issue already being debated in Richmond while seniors care was the topic of a candidate’s debate in New Westminster. Child care issues are on the radar of many candidates and the NDP have promised $10-a-day child care if elected.

The NDP has also promised to increase the minimum wage to help address poverty and to develop a drug plan to address the fentanyl crisis. The Green Party has supported a “comprehensive” anti-poverty strategy.

Unlike 2013, this year’s election will focus on much more than jobs. Social issues like seniors care, poverty, housing, and child care are already on the agenda of candidates across the province.

And thanks to our ‘Life in BC’ Snapshots—eight fact sheets on the state of social care in BC—and an op-ed campaign rolling out this week, we are working hard to help people understand their connection to the social issues facing BC.

Make sure to read and share the Federation emails going out this month. They contain contact information for the candidates in your riding. They also contain the contact information for other Federation members in your riding in case you want to meet with those candidates as a group to talk about social issues or to invite them to your pre-election events. (Be sure to print off the Snapshot fact sheets to bring with you!)

Those emails also contain notes on social care issues from The Federation’s 2017 Social Policy Forum, key messages that you can join The Federation is using during the election period, and links to other useful information.

Finally, I encourage you all to help us get out the vote on May 9. Federation member employees alone represent over 6000 votes. In the 2013 provincial election, some BC ridings had victory margins of less than 100 votes. That same election had a total voter turnout of 57%. In 2009, it was even lower: 51%.

Increasing voter turnout—helping your community get out the vote—is one of the easiest ways to have an impact during an election. This is especially true in a province like ours where voter turnout has been low in previous elections.

Continue to talk about the issues, share the Snapshots, and work with others in your riding. But also make sure you, your staff, and your client groups are registered to vote and know where to cast your ballot on May 9. In the coming weeks, we will share other resources and materials to help you and your community get out the vote.

If there is anything else we can do to help you prepare for the provincial election, please let us know. Being altogether better means we’re here to help when you need it!

Two years ago, The Federation scoured the news, research, and literature to take a ‘Snapshot’ of what life in BC was like. We wanted to understand how good things were for the people of our province. We also wanted to investigate important aspects of day-to-day life that have been overlooked by a government focused on economic prosperity.

Thing’s didn’t look that great. And two years later, they are no better. Over the past few months, The Federation staff team has been expanding and updating our ‘Life in BC’ Snapshot fact sheets to prove that very point. We want to help our members, and all the people of BC, talk about the state of social care in our province.

The 2017 Snapshot series includes a 2-page PDF on each of the following eight topics: Children and Youth; Community Inclusion; Employment and Wages; Gender-Based Violence; Housing and Homelessness; Mental Health and Substance Use; Poverty and Inequality; and Seniors. 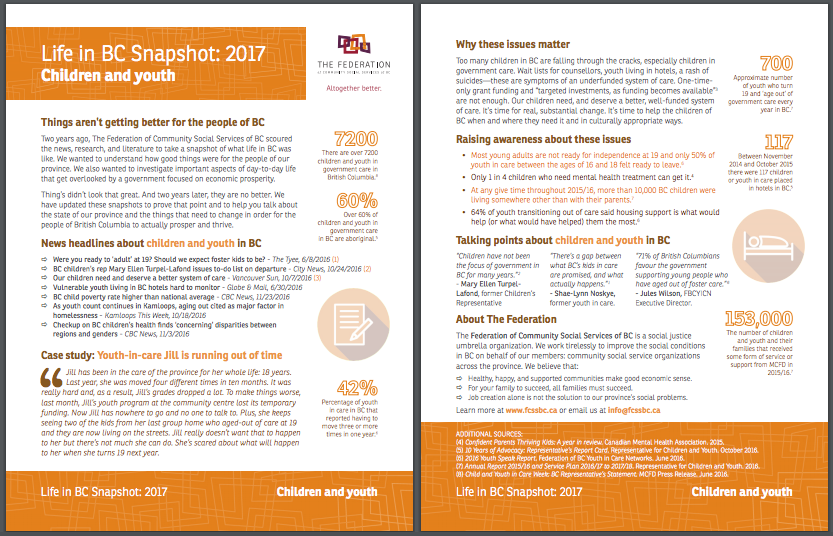 Each Snapshot includes relevant news headlines from the past year, easy to read facts and data points, a short case study example, various talking points, key statistics and research findings, and all the sources that are referenced.

Please use these Snapshots when talking with funders, politicians, and civil servants—they can be incredibly helpful. Share them with your staff and volunteers and encourage them to talk about these issues.

The next provincial election will take place on May 9. These snapshots describe what’s at stake and what needs to change in order for the people of British Columbia to actually prosper and thrive.

Our hope is that these Snapshots will empower Federation members and their staff (numbering over 6000 people!) to be informed and engaged citizens over the next few months as well as the years beyond. Whoever forms the next government will have a lot of work to do and we all need to help make sure it gets done.

You can view and download all eight snapshot fact sheets here: fcssbc.ca/federation-snapshot

Earlier this month in the BC legislature the MCFD Minister was asked about the implementation of the 2012 Residential Review Report that was co-authored by the Ministry and The Federation.

In her response, she mentioned that most of the recommendations have been implemented.

I know that report and its recommendations very well. So do many of you. And as much as I might empathize with MCFD’s many years of flat budgets, I could not help but take particular issue with those comments.

From our perspective, the Residential Review Report isn’t a checklist. It’s a framework for change. The number of boxes that have been ticked doesn’t really matter if kids in care are still killing themselves, still aging out, still losing touch with their heritage, and still falling through the cracks.

Our understanding is that permanency isn’t an item on a to-do list. Permanency is not moving a child to a new group home every year. (Alex Gervais had 17 different placements over 11 years.)

If we really want to fix the system, the goal should not be, “We’ve done all the things on the list.” The goal should be building a system of care that doesn’t drive kids to kill themselves.

The Minister was correct on one point: the Residential Review Report has not been ignored. But that does not mean The Federation is happy with the minimal progress that has been made since 2012. Especially not when the new Representative for Children and Youth Bernard Richard recently suggested that young people like Alex Gervais may still be alive today had more of the recommendations been implemented.

I hope the new money announced in last week’s budget is a sign that the government is ready to start making real, substantial progress on the recommendations in the Residential Review Report.

The government had long claimed to be committed to this work. Last week’s budget has provided an opportunity for our government partners to put those words into action, to renew their focus, and to start making the meaningful, lasting change that is long overdue. And I am looking forward to working closely with our government partners on improving BC’s system of care.

The Federation penned a response to the Minister’s statements made in the house. I feel it is important to make our stance very clear to our members, allies, and our government partners. As such, I encourage you to read the full editorial here.